A quick post as I am getting ready to travel! Yay, heading to San Diego soon. Wonderful friends and weather, although it has been great here lately.

I am entering my card in the CAS Christmas Card June Challenge where the word is gifts. Missed the May challenge because I dd not have a stocking stamp or die. Thanks to Greta I do have a  stamp that works this time. What do you think? Isn't the bear cute? 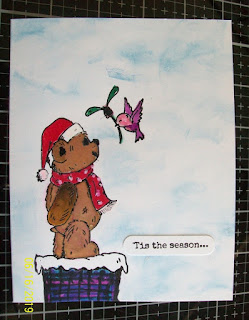 I think the bird is offering the little bear a gift. Christmas is the season of gifts. My hope is that this card is not too busy to be CAS. Here are some details on how it was created.

The stamp is wood mounted (I love my wood stamps) and is actually called Give Me a Kiss. It is retired from Penny Black. An almost one layer card, I began by tapping my stamp onto a VersaMark pad that is dedicated to using with dark inks. I then quickly inked the stamp with Versfine Onyx Black before adding the clear embossing powder and heating it up. That helped me with the staying within the lines while using my Zigs. Having only the 6 color set, I made the brown by combing the purple, blue and yellow and a little red on a block and picking up the color with a brush. Trying to keep the card CAS, I decided not to enhance the white on his cap and the snow on the chimney. The cloudy sky was made with a sponge and Stampin' Up! retired Bashful Blue. The sentiment is from the Ellen Hutson "Tis The Season set by Julie, stamped in black and punched out with a SU punch. The white card base is from my stash in the no-name paper folder. This was a fun card to make. Thanks for visiting. See you next time!
. 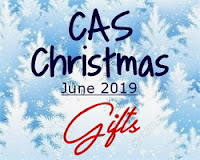 Posted by Jeanne H at 1:34 PM 6 comments: Links to this post

While blog surfing, I spotted an interesting challenge at Just Us Girls asking for a card made using embossing paste. Shown is my completed card. 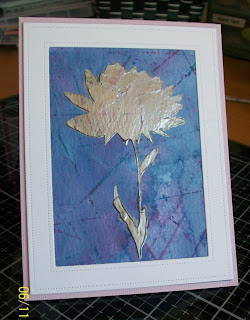 To make the background, I followed the directions by Karen Dunbrook on her blog called Snippets. I had saved her directions on my computer. Check it out from May of 2017. I used Distress Ink in Peacock Feathers with Distress Oxides Salty Ocean and Seedless Preserves mixing them on watercolor paper with added water. An old credit card with the edge dipped in black ink made the lines crisscrossing the paper. When dry, I took out a stencil from Studio 490 - Wendy Vecchi called Perfect Peony. The stencil came with a matching rubber stamp to stamp over ink for dimension, but, alas, I had used the stencil upside down!. Kind of a funny error. Right? Anyway, my NBUS embossing paste is also from Studio 490 in Metallic Silver. I put on the paste thickly and left it that way. Gives texture, I feel. To complete the card, I die cut a frame from stash white cardstock using the largest frame from Papertrey Ink's Pierced Feature Frames set. The card base is an old piece of Bazzill Basics textured cardstock named Rosebud. I find it difficult to find the textured cardstock in colors, so I hoard what I have. :-) If you have any sources, please let me know. Thanks!

This is my first time entering a challenge at JUGS, but I follow several of their designers. Bye for now. See you next time!

Busy Time Of The Year

I have been really busy making cards for several June happenings in my family. Such fun!

My oldest granddaughter Megan is graduating high school tomorrow night! So happy and proud. Her school colors of navy and yellow were chosen for her card. Here it is. 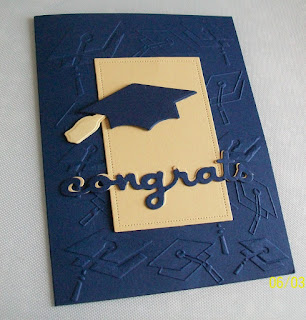 Megan showed me her hat and gown, which is where I got the idea for the card. I have had the embossing folder by Darice for ages, but I like using it here for texture. The hat with the tassel die is a NBUS. It is from Taylored Expressions, called The Tassel. I cut it out three times from each color for some dimension. The congrats is an oldie die from Papertrey Ink which is probably retired. The stitched rectangle is the center from the PTI Perfect Feature Frames set. A must have set, IMO. I cut out three of the colors which are by Stampin' Up! - Night of Navy and So Saffron to shadow and showcase the sentiment. Inside I stamped Congratulations Graduate! with a treasured PXS stamp from 1999.

The second important happening is that Maddie, my other granddaughter turns 16 on Saturday. She and her family are on vacation, so she already has seen her card. 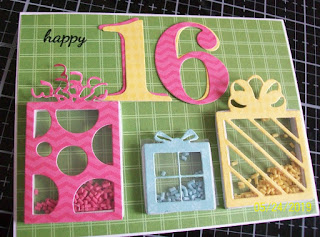 It was fun to make with the birthday kit by Queen & Co. This time the card was fairly easy to assemble, although I had misplaced the directions. Sigh. All the papers, beads and dies came with the kit. The numbers are cut from the same paper using numbers from the above die set. The happy, stamped in Versafine Onyx Black is from my stash. Anyway, Maddie loved her card. We'll go shopping for a present when she returns.

The third momentous occasion in early June was the first birthday of my twin great-nieces. I really struggled with this card and it is probably not my best effort. I hope their parents like it, though. I bet their big sister liked it. The thought counts, right? The twin girls are adorable! 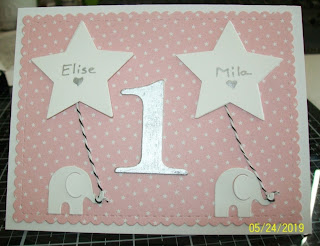 To make the card I first cut the background with a SurgarPea Designs scalloped die from the Card Front Elements Builder set. The pink dotted paper is from a Text Style pack by PTI from 2008, called Bitty Star Basics. I seldom use pretty paper, but should. The stars are from SU's Stars Framelits die set and I hand wrote with a silver pen the twin's names. The 1, of course, is by PTI. The cute little elephants were cut out with a Poppystamps Inc. die called Small Elephant and attached to the stars with a snippet of twine. Happy Birthday was stamped inside, but I don't recall which stamp I used and the card has been mailed. The 1 is colored with the same silver pen for some shine.

Blog and cards done for now! Whew. Thanks for stopping by. See you next time!

Posted by Jeanne H at 9:38 PM 4 comments: Links to this post